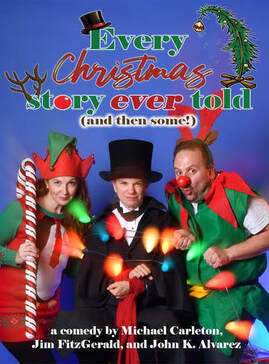 EVERY CHRISTMAS STORY EVER TOLD, 2019
Jim Warren's superb direction and the immense talent of Hicks, Brewer and Brown result in a flawless production that truly makes this holiday season more merry and bright. One of the things I love most about this production is that amid all the satire, there's a loving nod to all the stories unfolding onstage. NSF's production of EVERY CHRISTMAS STORY EVER TOLD (AND THEN SOME!) is truly a big holiday party for the whole family.
by Chad Young
nashvilleparent.com
nashvilleparent.com/nashville-shakes-christmas-story-is-a-side-splitting-holiday-hit 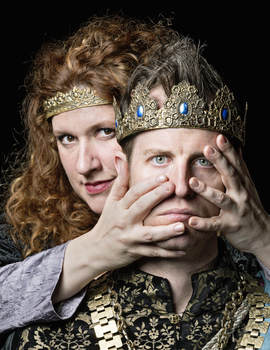 THE RISE OF QUEEN MARGARET (Henry VI, Part 2), 2016
What's in a name? Both the name of and names in this William Shakespeare play are subject of a comic riff before the play even begins. Once the production gets going, however, this play by any name and containing many names proves to be one of Shakespeare's great masterworks, thanks to the vivid portrayals and verse readings of an American Shakespeare Center cast under the virtuosic direction of Jim Warren.
by Eric Minton
Shakespeareances.com
shakespeareances.com/willpower/onstage/Henry_VI_2-03 ASC16.html 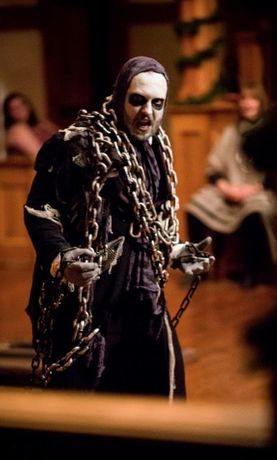 A CHRISTMAS CAROL, 2015
This production has a fourth spirit (five, counting Marley): that of the Blackfriars Playhouse. The world's only replication of William Shakespeare's indoor theater, the intimate space puts the audience in close, surrounding proximity to the actors. We become part of Scrooge's journey, part of the visions that lead him to salvation. The cast build this mood through engaging, in character, directly with the audience and through music. This ensemble, much of it comprised of the ASC's touring troupe, is musically talented on a multitude of instruments, and Parr in particular has the vocal chops to send a Chicago blues club into rapture. They not only perform Christmas carols but also do a rousing rendition of Nick Lowe's (What's So Funny 'Bout) Peace, Love, and Understanding during the intermission, and they close the play with a revival-tent-raising This Little Light of Mine.... I was flushed with the spirit of Christmases.  Not celebrate the holiday?  I say bah, humbug! to that notion.
by Eric Minton
Shakespeareances.com
shakespeareances.com/willpower/nonshakespear/Christmas_Carol-04-ASC15.html
WITTENBERG, 2015
WITTENBERG is a modern comedy that raises questions about religion, existence and fate, while at the same time making the audience giggle with clever, cheeky references and potty humor. It pairs nicely with HAMLET and DOCTOR FAUSTUS, also part of the season; Patrick Earl plays Hamlet in both shows, and Andrew Goldwasser plays Doctor Faustus in both shows.  ASC co-founder and artistic director Jim Warren has been looking for a way to have WITTENBERG at the Blackfriars Playhouse for seven years. And, true to ASC style, it's go big or go home. This is the first time this show will be performed in repertory with its early modern counterparts, a dream of Davalos's.
by Monique Calello
USA Today
www.usatoday.com/story/entertainment/2015/04/29/shakespeare-center-performs-wittenberg/26590007/
A six-part series about the production is online at www.facebook.com/americanshakespearecenter and includes interviews with Jim Warren and lead actors Patrick Earl and Andrew Goldwasser.
1. https://www.youtube.com/watch?v=MCWHQIROVg4
2. https://www.youtube.com/watch?v=L5ipDohYFgE
3. https://www.youtube.com/watch?v=qCYIrXssiI4
4. https://www.youtube.com/watch?v=g7hb-q3PnDk
5. https://www.youtube.com/watch?v=EhRZvZAwGUM
6. https://www.youtube.com/watch?v=qW6gXwpNDaE


MACBETH, 2014
Thus, by showing true fealty to the text and relying on superb acting and simple stage tricks, ASC produces a MACBETH that is a psychological thriller in its most visceral form: the spectacle is in your own imagination, the special effect is your thumping heart… Because of its text-centric nature, even with such an oft-acted piece as MACBETH, the play seems brand-new because it arrives at our ears and in our conscious without any conceptual filters.
by Eric Minton
Shakespeareances.com
http://www.shakespeareances.com/willpower/onstage/Macbeth-14-ASC14.html


ROMEO AND JULIET, 2013
director Jim Warren…told the actors that he wanted the production “to remind us all what it was like to fall in love for the first time, or the last time, or to show us what we have in front of us if we haven’t yet fallen in love.” He does that with song, dance, violence, great performances, and gorgeous language. By the time a long blast from an air horn breaks up the first street brawl, I’m breathing like I did when I first fell in love.
by Mark Dewey
DC Theatre Scene
https://dctheatrescene.com/2013/08/06/falling-in-love-with-romeo-and-juliet-again/


THE TWELVE DATES OF CHRISTMAS, 2010+11
Making its world premier in this ASC holiday season, THE 12 DATES OF CHRISTMAS has the kind of sharp writing and insights that could yet escalate it into the Christmas tradition repertoire. Ginna Hoben’s monologue, with many autobiographical references, is much more than a rant at men or even at the dating scene. It’s a woman’s account of navigating through a variety of human relationships, not only male-female but mother-daughter, sister-sister, woman-woman, and adult-child. In a most subtle way she illustrates how holidays can shape these relationships, too; and how, sometimes, the mold is not a true one.
by Eric Minton
Shakespeareances.com
http://shakespeareances.com/willpower/nonshakespeare/12Dates-01-ASC10.html


AS YOU LIKE IT, 2010/11
The company of eleven players works before a set of simple archways hung with curtains.  They promise two hours of traffic on this stage, and there's not a split second of delay in transitions.  Exits and entrances occur with simultaneous swishes through different curtains, a precision born of the six months that they have worked together on these stagings.  The rhythm is quick, the diction is exact and the stage business is calculated, but there's not a hint of staleness.  The audience sees and shares a joy in the disguises, the wordplay and the silly situations.
by Michael Meigs
PlayShakespeare.com
https://www.playshakespeare.com/as-you-like-it-reviews/theatre-reviews/5369-the-restless-ecstasy-of-as-you-like-it


MUCH ADO ABOUT NOTHING, 2009
In kicking off the American Shakespeare Center's summer season, director Jim Warren has pulled on his steeltoed sneakers and sent MUCH ADO ABOUT NOTHING sailing out of the stadium. In fact, the only negative thing I can say about this play — which is the third version that I've seen at the Blackfriars Playhouse — is that, inevitably, it comes to an end.
by Charles Culbertson
Staunton News Leader
http://ckellyuva.com/ASC/ASC24.1_MuchAdo_StauntonNewsLeader2009.pdf


OTHELLO, 2006
I saw three of the four Shakespeare plays now alternating in repertory at the Blackfriars. All were satisfying, but the one I found most illuminating was OTHELLO, directed by co-founder Mr. Warren. It goes without saying that OTHELLO is deadly serious, but Mr. Warren and his cast approached it from a surprising angle: René Thornton Jr. was a crisply spoken, light-voiced Othello, Sarah Fallon an unabashedly sexy Des- demona, while James Keegan played the villainous Iago as a balding, middle-age clown. I don’t think I’ve ever heard so much laughter at a performance of OTHELLO, which made the play’s climactic explosion of madness and violence all the more shocking.
by Terry Teachout
Wall Street Journal
https://www.wsj.com/articles/SB115827138649763561
j i m w a r r e n . d i r e c t o r @ g m a i l. c o m